Archive for the tag “water”

Safe water for Mama Mary and all her ‘grandchildren’

From our humanitarian partner, BGR, comes this heart-warming video and update:

Mama Mary told us how hard it was for her at her age to get water. She couldn’t go the long distances and haul the water back to her house. Since she was the “grandmother” of the community, she would go each day with a glass to every home in that community and ask for water. She would make her round of almost 50 homes, and that is how she got her drinking, bathing, cleaning and cooking water for each day. She remarked, “Water is life…without water, life is miserable.”

Our local partners were able to help get a flowerpot water filter for Mama Mary to use so that she would have clean drinking water. We also worked with the community to help construct a community water system. Now, not only does Mama Mary have good, safe drinking water and plenty of it, all of her “grandchildren” in the village do as well.

If (fill in the blank) was a country … 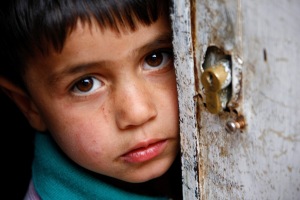 — If poverty was a country, it would by far be the largest country in the world. Over 40 percent of the world lives in either moderate or absolute poverty. That would be a population of 2.8 billion. The two largest countries in the world today (China and India) combined wouldn’t even reach that number.

— If absolute poverty was a country, it would be one of the top three largest countries in the world. It would have about 1.1 billion people. Absolute poverty is defined as people who live on less than one US dollar per day. I wonder if some dictator would even want to take it over?

— If hunger was a country, it would be the third largest country in the world at 900 million. It would almost make up three times the population of the USA. I wonder if it were country, would it be as invisible to the rest of the world as it is today?

— If refugees and internally displaced persons were a country, it would be much smaller. Only about 80 million and would rank around No. 15 in population in the world. Imagine 80 million people living in UN tents, depending 100 percent on handouts for their daily existence.

— If HIV/AIDS was a country, it would have “only” 35 million people. Of course that wouldn’t count the 15 million orphans left behind by parents who have died of this horrible disease. I guess the only reason this country is not growing quickly is that the death rate is so high.

— If people without adequate access to water were a country, it would make up about one out of every 7 persons alive on the earth today. Thirsty, anyone?

I don’t know what it is to live in the country of poverty or hunger. I have not had to flee my home and country. I have good health and easy access to drinking water. And I am a one of those 4 percent who consume 50 percent of the world’s resources.

I wonder what, if anything, all of this means.

Aaron Blanton: Why wouldn’t we want to help? 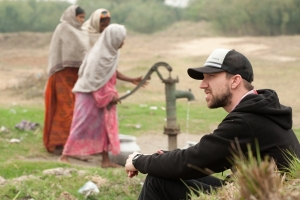 BIHAR STATE, India—Aaron Blanton rubs the sleep from his eyes as he slides from his bunk on an overnight train to Patna, India. The trip, scheduled at nine hours, has now dragged on for more than 13. Worse, Blanton’s suitcase didn’t make his flight into New Delhi. He’s been living in the same pair of clothes for three days.

It sounds like a travel horror story from his time on tour as the drummer for SONICFLOOd, or more recently, front man for the Christian rock group By the Tree. Aside from a few wrinkles and a bad case of bed head, however, Blanton seems ready to rock. But it’s not a gig that’s brought the 32-year-old Christian musician more than 10,000 miles from his California home — it’s clean water.

Blanton is part of OneLife, a student-driven movement sponsored by IMB. It challenges young adults to use their “one life” to make a difference in others’ lives for Christ’s glory, meeting physical and spiritual needs around the globe. Specifically, Blanton wants to raise awareness for OneLife’s “One Cup of Water” project. The idea is simple. Repair or replace broken, hand-pumped wells in 1,200 rural villages across Bihar, India’s poorest state. The payoff? Providing clean drinking water to thousands of men, women and children living in absolute poverty.

It’s a cheap fix, at least by Western standards. Before heading to a nearby village for a firsthand look at the problem, Blanton stops at a roadside plumbing store (shack). He emerges with a pair of brand-new water pump handles, essentially 2-foot long, cast-iron bars. Broken handles are a common problem among village wells in the area, rendering otherwise good pumps useless. Together, the handles cost 400 rupees. That’s about $8 each — less than the cost of a movie ticket.

“We’re talking under 25 bucks to give a village clean water. That’s amazing,” Blanton says with a grin. He lugs the handles to the SUV and the OneLife team presses on. The village is at least an hour’s drive over rough, sometimes crowded, rural roads that wind through mustard farms and rice fields. It’s beautiful country, and Blanton’s excitement is palpable.

“Every time I come here it’s the same impression — that it is possible to change lives in a place that seems impossible. That’s what God’s grace does,” he says. “Water is one of those essential ingredients. … But they just don’t have the means.

“I hear the question, ‘Why can’t they do it themselves?’ a lot as I get into these kinds of humanitarian projects. But that’s not what the Bible says. … It says if they ask, give. It says if we see a need, fill it. … Why wouldn’t we want to help? That’s my question back.”

Read the rest of the story — and find out how you can help — by clicking here.

Watch Aaron’s powerful music video We Are The Hands.