Archive for the tag “Rwanda”

Syria: The sounds of war echo in the children’s ears

Syrian children are being crippled by the ongoing violence in their country. The war has become “the biggest humanitarian tragedy since the Rwandan genocide,” says UN refugees commissioner Antonio Guterres. An estimated 3 million Syrians have fled the country, 6.5 million are displaced within the country, and 3 million more need humanitarian help. 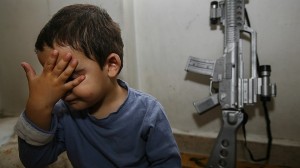 BEIRUT, Lebanon — With dirt on her face, the small girl shyly approached the crowd holding a pack of lighters for sale. Barely reaching the height of an adult’s waist, she glanced upward at passersby asking in Arabic if they would purchase one of her multicolored lighters. When asked how old she was, she responded shyly that she was 4.

Walking the streets of Beirut, Lebanon, it is impossible to miss the children weaving through the cars and crowds. They walk up to strangers holding items to sell, such as lighters, roses, gum packets and a variety of non-essential items.

As each day passes of the Syrian conflict that began in March 2011, the childhood and futures of many Syrian children are threatened.

The conflict erupted into a full-scale war that has destroyed homes and schools — and left the children’s innocence in the rubble. Children have watched as they lost family members and as explosions destroyed their schools. Some have experienced physical wounds themselves.

More than 5 million Syrian children are affected by the ongoing conflict, and it is estimated that more than half of the 2.2 million Syrian refugees are children, the UN says.

As many families have been internally displaced, children are forced to begin to work to help provide for their families, are recruited for the militia or are advised to stay in doors to not be harmed. Some children have been out of school for three years and are forgetting what they have previously studied.

Rayan* works for a ministry in Syria whose sole initiative is to provide education and trauma therapy to children. She explains how many of the children have lost their fathers and brothers to the war, the men fighting on either side of the forces.

While the teachers provide the children with the opportunity to learn English, Arabic and math, the teachers also believe it is important to teach the children not to have hatred or suspicion of one another and learn to love each other.

“Children feel like they are rejected. They are feeling [this] because they are children of rebels or terrorists and feel conflicted,” Rayan said. “People tell them they are the reason for why everything is happening. But I say, ‘You are children. God loves you. You are not the reason for what has happened; you are the hope of Syria.’”

In addition to the threat of young boys being involved in the fighting, girls face the risk of sexual violence. Desperate not to subject their daughters to potential horrors, many families are deciding to marry their daughters to suitors in Syria and abroad. Early marriage sometimes is used as a “cover” for sexual exploitation, a recent report from Save the Children said. The girls are “divorced” after a short time and sent back to their families.

Outside of Syria, children face a different type of potential harm.

An increasing number of children have taken to the streets of Lebanon to sell or beg for money. Lebanon houses more than 826,669 registered Syrian refugees, with 52 percent of them being children. Many of the children are not in school and they are resorting to street work or manual labor to help provide for themselves or their families. The UN is launching a “Back to Learning” campaign, which “provides for informal education so children don’t fall too far behind.”

Another country greatly affected by the war, Jordan, is working alongside NGOs to provide schooling for Syrian refugees. More than half a million Syrians that were registered with the UN refugee agency at the end of September, were women and children. Children from 5 to 17 make up 25 percent of the Syrian refugee population in Jordan, according to the New York Times.

Organizations throughout the region are fighting not to let this generation of children be forgotten. Faris*, a Christian Syrian, said, “We have so many kids that are growing up with the sounds of war. These kids — they shouldn’t have to listen to that. They should have a place that is peaceful and secure and not have to worry about the war. That is a big [prayer] request,” he said.

As Syrian Christians are working tirelessly to help the children around them who are struggling, organizations and ministries are working outside of Syria. The reason Rayan continues in her ministry to children in Syria is because “we want to show them that we are always available for them. We are standing with them.”

How can you help? Click here to find out.