Archive for the tag “Heidelberg Project” 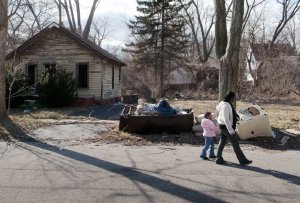 Multiplying justice in the city requires us to attack the problem of urban blight. Evil haunts abandoned blocks of decaying buildings — and victimizes helpless souls too poor to flee the war zone.

As the article below notes, “blight creates an apocalyptic cityscape, the perfect setting for other social woes — a place where broken-windows theory is no longer hypothetical. It is a literal embodiment of collapsing communities. And when property is allowed to deteriorate so dramatically, a culture arises in which property rights are trampled. Thieves and addicts strip the buildings of metals, sometimes electrocuting themselves in the process. Blighted buildings offer an ideal refuge for drug dealers, pimps, and criminals on the run.”

Summarizing: In Detroit’s 139 square miles, for example, the Dangerous Building Inventory lists 38,779 structures. The city’s bureaucracy has failed to address the problem and continually thwarts attempts to tear down abandoned buildings. Innovative partnerships, however, like Detroit’s Blight Authority, are arising from private, artistic, and charitable sectors and demonstrating that free-market principles can succeed where government fails.

For example, the article says, Tyree Guyton’s Heidelberg Project uses discarded objects and paint to transform abandoned buildings into open-air art installations. Bill Pulte, whose grandfather founded Pulte Homes, organized a massive, privately funded demolition effort that knocked down ten blocks of blighted houses in ten days and served as the launching point for the Detroit Blight Authority, a nonprofit group working alongside the mayor’s office, the Kresge Foundation, DTE Energy, Michigan Caterpillar, and others to launch the most ambitious anti-blight effort Detroit has ever seen.

Jillian Kay Melchior’s article concludes: “The Blight Authority is a source of hope in an otherwise troubling urban setting. If it succeeds, this private effort may change not only Detroit’s physical landscape but also its political one. Detroit’s blight problem is a tangible lesson about the limits of government. Like other efforts before it, the Blight Authority demonstrates that real power for change lies with private citizens who understand those limits — and then get to work themselves.”

Read this persuasive, encouraging article by clicking here.
Get involved with reclaiming the city through Urban Onramps or The Rebuild Initiative.