Archive for the tag “Guatemala” 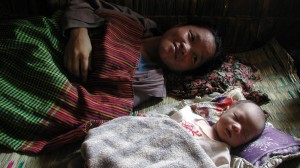 How do you teach women who have no concept of what a germ is, about good health care practices?

“If you don’t have an education where you understand that, for instance, bacteria and viruses and parasites that you cannot see are causing you to be ill … then it’s a big leap of faith for them to believe that,” said Vicki Grossmann, a primary care medical practitioner in Guatemala.

This is but one challenge Southern Baptist health care workers face as they minister to women overseas.

Margaret Bricker,* a health care provider in Southeast Asia, works in a medical clinic and hosts mobile clinics in her community. Though Bricker has worked in this third-world country for nearly 16 years, she is still struck by the physical toll poverty takes.

She recently met a 37-year-old woman from the slums who looked as if she were 50. A life full of struggle — including keeping her children off the streets and finding enough money each day to survive — had caused debilitating worry. She slept only three hours a night.

“… Even if there is someone with a competent medical provider in the area, if [these poor women] don’t really have the resources, they really can’t access them,” Bricker said.

Across the globe, millions of women are suffering because they lack access to or knowledge of good health care. The major culprits: poverty, lack of education and inequality in society.

“Globally, in any society, women have more health issues and needs than men,” said Sheryl Stack,* a health care worker in North Africa and the Middle East. “In societies where health care is both physically and economically challenging to access, women are particularly impacted and in need of advocacy.”

“Going door to door is a great thing, handing out Bibles is a great thing … but it’s much more effective to build a relationship and to meet people’s perceived needs,” said Grossman. “You might say, ‘Well, God is interested in them going to heaven’ — yes, He is interested in them knowing Him as Savior. Yes, I agree, but they don’t know that; they don’t see that. They don’t feel that as a need — but they feel a need that they’re hungry or that they’re sick.”

By meeting their human needs, she continued, people are more open to hearing about how God can meet their spiritual needs.

Jenny Byrd* serves in a developing country where people often have “no food, no shelter and no hope.”

“When you live like this, taking care of your health becomes a special privilege,” said Byrd, a family nurse practitioner in North Africa and the Middle East. “Life is focused on just surviving day to day — and hoping there is food to eat and water to drink.”

According to the United Nations’ “End Poverty 2015” campaign: “Women disproportionately suffer from hunger, disease, environmental degradation and impoverishment. As a result, poverty remains stubbornly ‘feminized,’ with women accounting for a vast percentage of the world’s absolute poor.”

In many societies, families can afford for only one or two children to attend school; sons are sent first. But educating women, say Southern Baptist workers, is vital.

“Just a simple intervention like letting girls go to school and learn to read has huge implications for their future families, health and kids,” said Dr. Levi Gladstone,* a physician in Central Asia.

Bricker, too, sees the ill effects of poor education in her Southeast Asian community. Many times, people “absolutely have no real idea about how the body functions and why nutrition is important.”

A common belief among women in her area is that water makes them fat, so they drink little more than a thimbleful a day. They suffer from headaches and fatigue, not realizing they are simply dehydrated. “[Women’s health] shapes the health of the whole family — and for the next generation — because what they know and understand is what they pass off to their children,” Bricker said.

Unfortunately, women in many cultures simply lack the right to make their own health decisions.

“If men keep most of the finances [and] are the decision makers, then many of the women are not independent to make the decision or have the access to the finances,” said Stack of the trend she sees in North Africa and the Middle East.

Grossmann also observes gender inequality in Guatemala. She recently encountered a woman  suffering from a gynecological issue. Because she did not work and make her own money, her husband was unwilling to give her funds for medical help.

“That’s the concept of marriage — you marry a woman to have children and cook for you,” Grossmann said. “… [Men] often don’t see that cooking, caring for the house, buying food, taking care of children is valuable. You don’t get paid for domestic work, so it’s not as valuable as the man’s outside job that pays.”

Gender inequality can even translate into food distribution —in many third-world countries men get the first portion or the meat and women get whatever is left.

“Women are thought of as second [class], sometimes as a possession, and not given the same opportunities as men,” said Josie Gabdon,* a nurse in South Asia.

In the years following, IMB established overseas hospitals in Asia, the Middle East, Africa and the Americas. Since the 1980s these institutions have been handed over to local Baptist conventions, other organizations or governments to run — but Southern Baptists still have missionary personnel present in a few.

“By working in what is my passion — medicine — the Gospel and telling all my patients about Him naturally flows and each of them hear Truth when they come [to my clinic],” Byrd said.

In 2009, Byrd gave hospice care to a woman dying of breast cancer. For four months she eased the woman’s physical pain, but Byrd also shared the hope for eternal life. Two months before her death, May* accepted Christ.

“I did not know what to do for May — I had no cures or answers … all I had was our heavenly Father, and ultimately that was all she needed,” Byrd said. (Read May’s full story here).

For these Southern Baptist workers, health and the Gospel go hand in hand — and the Great Physician is the best doctor.

“We really see this as the most important thing to do — which is share the Gospel with people,” said Bricker of the ones she serves. “And we don’t want to just heal their physical bodies now, and then have them die and go into an eternity without God.”