Archive for the tag “GHR” 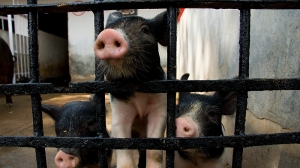 Paulus Maharaj* had a dream. It was a dream that brought him up close and personal to one of the dirtiest, smelliest jobs in the world — raising pigs.

The smells of rotten, day-old food and festering animal waste would turn even the strongest of stomachs. But for Paulus and a handful of rural Indian pastors, they are the smells of progress, smells that mean their families and communities can better support themselves. That’s what Paulus’ dream was all about, and Southern Baptists’ gifts through the World Hunger Fund** made that dream a reality.

It all began when Paulus took time away from the overcrowded city streets of his hometown to visit the wide-open spaces of village life. A pastor and teacher, Paulus wanted to encourage other pastors he had the opportunity to train. What he saw in their homes left a lasting impression.

“The pastors, their children eat only rice. They can’t afford even milk or vegetables and fruit,” Paulus says. “Many pastors are not able to send their children to school.”

People in this area of India typically need no less than 5,000 rupees per month (a little over $80) to feed and support their families. The pastors Paulus saw were making less than 2,000 rupees a month ($30), if that much.

Most of the pastors relied on their already poor congregations — other villagers like themselves. Depending mostly on crops that struggled to grow in the hard, dusty soil or on livestock prone to sickness and malnourishment, these church members simply could not afford to give much to their pastors.

Paulus knew the pastors’ ministries and families would continue to suffer unless they had help.

“I said to myself, how can I help these people?” Paulus recalls. “I was thinking, what is the best way to keep their ministries going, to help them maintain financial stability without depending on outside income?”

Paulus’ dream took an interesting turn as he searched at the local vet school for a Thanksgiving turkey for a visiting American friend. There Paulus heard the deep grunts of a much less attractive animal.

As it happened, the vet school specialized in pig husbandry. The school had scores of stalls packed with the biggest, fattest mama pigs he’d seen in some time, many with squealing babies following closely — a stark comparison to the stunted, sickly pigs he’d seen in most villages. He saw so many breeds — black ones, brown ones, spotted ones, some with large snouts, some with narrow, some with sleek bodies, some with wrinkled.

“Someone had told me about raising pigs before, but I didn’t think it would work,” says Paulus. “At the school I came to know that it could be the easiest and best way to support the pastors and their families and help them be self-supported.”

His dream began to take wings — or rather hooves.

Paulus researched pig husbandry and became convinced it was just what the rural pastors needed. Soon, Paulus and IMB representative Clifton Melek* developed a plan to provide pig husbandry training to rural pastors. One thing was lacking — seed money to get the project off and running.

Baptist Global Response, through the World Hunger Fund, was able to answer their call for help and provide funds.

At first, many pastors hesitated. Did they really want to wake up at dawn every day and collect rancid leftovers to feed their pigs? Was it worth wafting smells and endless squealing and grunting just steps from their houses? What would their neighbors think?

After an awareness day that included a tour of the vet school, 20 pastors decided to participate. For 15 days at the vet school, they learned the basics of raising pigs — feeding, providing shelter, administering immunizations and performing basic medical care.

The pastors received this training plus two starter pigs through the World Hunger Fund. They went back to their villages ready to succeed.

But for most pastors, things got off to a rocky start. Surprisingly, a lot of opposition came from church members’ interpretation of a familiar Bible story — the prodigal son. They associated caring for pigs with backsliding.

“People mocked me at first,” says Kanai Hembrom,* a pastor who received training. “They laughed at me and said to me, ‘What happened to you? Have you lost your mind?’”

During monthly meetings with the pastors, Paulus heard about the opposition and began to wonder if the program would succeed. “I was discouraged, and I asked God, ‘God, [if] it is you who gave me this thought and vision, why is this happening?’”

Over a year has gone by, and church members and neighbors have changed their tune. Within months, many of the pigs had five to six babies, increasing the pastors’ wealth to at least 25,000 rupees ($400)  — more than 10 times what they need to care for their families for one month. By the time the pigs were ready to sell in the market (a matter of months), each pig could earn the pastors up to 10,000 rupees (about $160).

Rather than hindering ministry, pig farming has opened up new ways for pastors to serve their church members.

Doors once tightly shut have opened.

Neighbors noticed how pastors’ lives were improving because of the pigs, which grew faster than any they had seen before. They were healthy, robust and quickly sold to vendors.

“The people who are very poor are looking at me and saying, ‘If this man can get this kind of income, why can’t we?’” says Sontash. “A few of [my neighbors] have already requested for me to provide baby pigs for them to begin raising.”

Several pastors have been able to share their expertise and build relationships to share the Gospel with people who have not heard it before.

Kanai Hembrom has done so well with his pigs that he is known by many as the “pig doctor.” He is now called upon to administer vaccines and help other farmers whose animals become sick.

Kanai says happily, “I feel like this is the grace of God that I can go to the communities and do these treatments … As my pigs increase, so do my churches.”

The impact of the World Hunger Fund goes beyond the 20 pastors initially trained. After their farms begin to flourish, each is expected to train and provide two pigs to a “Timothy,” who will then start his own pig farm. Many pastors have already begun to invest in other farmers and break the hunger cycle in their areas.

Sontash plans to pass on his expertise and starter pigs to unemployed youths in his community who have little education and find it hard to feed themselves. “I just considered that this is a great return I can give to my community so they can be blessed by my work,” he says.

Paulus is grateful to God for His provision. “It was God’s direction leading me to be connected with these pastors. It was God who put this desire in my heart,” he reflects. “All glory goes to God.”

Without support from the World Hunger Fund through BGR, this program would still be just a dream. The funds given reach far beyond the original 20 pastors to include their families, neighbors and other communities. Paulus hopes to continue training pastors who will go into other locations and reach out to those who need it.

“Thank you BGR and World Hunger Fund for making my dreams come true to help the pastors have income that is self-sustaining,” he says through a huge smile. “Dhanyavaad!”