Archive for the tag “A Free People’s Suicide”

What will get America back on course? 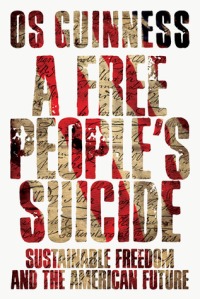 Polls show that most Americans believe the nation is on the wrong course, and many of us see signs of decay — with crushing debt and deficits, anti-American mob action in the Middle East and North Africa, rampant and enduring unemployment, and a cultural milieu that seems to grow coarser by the day. So what are we to do about all this?

Well, Guinness says the problem is ultimately not going to be solved by politicians, or even solely by a return to our founding charter, the Constitution. We need an old-fashioned “reformation of customs.”

Guinness writes, “What the framers believed should complement and reinforce the Constitution and its separation of powers is the distinctive moral ecology that is at the heart of ordered liberty.” These are the “habits of the heart” that Alexis de Tocqueville identified, and which too many of us have lost.

As the cartoon character Pogo once said, “We have met the enemy, and he is us.” It’s entirely our choice, Guinness says, whether we will face national desolation or not.

Sometimes a book is so important and so timely that not to have read it is to embarrass oneself. Let me say that Os Guinness’ new book, A Free People’s Suicide: Sustainable Freedom and the American Future, is such a book.

A Free People’s Suicide will be discussed in the next two BreakPoints.

If destruction be our lot, we must ourselves be its author and finisher. As a nation of freemen, we must live through all time, or die by suicide.
Abraham Lincoln

Nothing is more daring in the American experiment than the founders’ belief that the American republic could remain free forever. But how was this to be done, and are Americans doing it today? It is not enough for freedom to be won. It must also be sustained.

Cultural observer Os Guinness argues that the American experiment in freedom is at risk. Summoning historical evidence on how democracies evolve, Guinness shows that contemporary views of freedom–most typically, a negative freedom from constraint– are unsustainable because they undermine the conditions necessary for freedom to thrive. He calls us to reconsider the audacity of sustainable freedom and what it would take to restore it.

“In the end,” Guinness writes, “the ultimate threat to the American republic will be Americans. The problem is not wolves at the door but termites in the floor.” The future of the republic depends on whether Americans will rise to the challenge of living up to America’s unfulfilled potential for freedom, both for itself and for the world.