More than income for her family 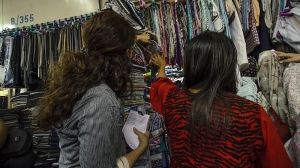 Uncertainty rocked Vanna Keo* after her husband accepted Christ. She had never met any Christians before, and now her husband was one. In supporting her husband, she agreed to meet Don and Dayla Patrick,* IMB workers in Southeast Asia for more than 15 years. The Patricks were the ones who shared the Gospel with her husband and led him to Christ. She also wanted to see for herself what real Christians were like.

Laughing at her perspective at the time, Keo says, “I met them [the Patricks] and saw who they were. They did not do any weird or crazy things to us. After that, I didn’t have any bad feelings towards them.”

A couple of years following her husband’s conversion, Keo accepted Christ and coincidentally, their family came upon hard financial times when their Muslim community turned against them. Unable to cover the family’s expenses, Keo’s husband, Rith,* looked for work aiding several Christian organizations with various projects. But the jobs did not produce much income for the family.

Dayla Patrick and Keo continued building a friendship, and Patrick noted the difficult times the family was going through.

Patrick’s dark curls bob as she says, “Knowing them, and visiting their house, we began to see their salaries could not keep up with the expenses.”

Keo looked for ways she could help bring in money, saying, “I considered what I could do since I’m a mother, and I decided on sewing.”

Her ability to sew sparked an idea in Patrick’s mind.

“After Keo sewed for me,” she says, “I thought, ‘Maybe this is something to that can help them.’”

Six years later, Keo and Patrick sit on a white tiled floor, poring over new designs for the dresses that sustain Keo’s family.

Bold pink and brown designs splay across the ground as Keo holds several strips of brown cloth in her hands. Lines furrow across her forehead as she glances between fabrics before finally calling Patrick over to help decide which material best complements the pink. Tucking her knees under, Patrick narrows the selection to two designs, leaving the final choice up to Keo.

After selecting a chocolate brown material, Keo clicks on the sewing machine and sets to work cutting, fitting, sewing and tweaking a dress for one of Patrick’s daughters to try on for size. Her fingers guide the material through the machine, correcting any misdirection before a mistake results.

These dresses are primarily sold in churches across the U.S., allowing women in America to help Keo and her friends support their families.

While Keo sews, Patrick watches and talks about helping start the sewing project.

Folding several bolts of fabric, she says, “I don’t really know how to sew, but Keo is a seamstress. It was the best way to help her make money for their family. So I learned.”

Stacking an assortment of fabrics, Patrick says that while Keo’s husband studied the Bible and set to work on an important ministry project, it was the dresses Keo sold that supported the family until Rith found a steady stream of income.

Holding up a finished dress, Keo joins Patrick on the floor while they examine the finished product.

Keo says the dresses have done more than provide an income for her family. The project has deepened her faith.

“I have experienced the Lord’s intervention in my life.” Looking at the newly sewn dress, she continues, “To see answered prayers has helped my faith grow and helped me through difficult struggles.”

Keo gathers more fabric for a second dress and Patrick helps her pick out a bold blue pattern. She sets the fabric on the table and turns to tell how the dresses allow her to share the Gospel as well.

Her eyes light up as she says, “When they come, I can share about Jesus, That is what is important about this project — the opportunity to share my faith I wouldn’t normally have in the community.”

Keo finishes the second dress. Then while the children play in the early evening, she and Patrick sit on the cool tile and talk about what they have learned from the sewing project. For Keo, it was more than a hobby; her family experienced relief to tangible needs.

She pauses before looking up and saying, “We had money for once; I had a job. At one point my brother was helping us, and now he is at university. It paid for his university. The project was a way for my family to help themselves during a time of real need.”

Holding Keo’s hand, Patrick says, “One of the things I really like about the project is it connects women in Southeast Asia, who are trying to feed their families, with women in the States, who want to help in a tangible way.”

Susan McPherson,* who lives in Texas and is long-time customer of Patrick’s and Keo’s project, echoes Patrick’s thoughts on buying the dresses. “The quality is wonderful and I loved that I was able to help other mothers across the world by buying a dress from them.”

McPherson has bought dresses when Patrick sells them in churches during her visits to the U.S. Patrick sends the profits directly to Keo.