In Afghanistan, girls — as young as 6 — are being “married” to adult men who loaned money to poor farmers to finance crops of opium poppies. When the farmer can’t repay the loan, the drug lord demands a daughter in payment. When the children aren’t taken as wives, they often are trafficked to other countries, where they are used for transporting drugs or put into sex slavery. 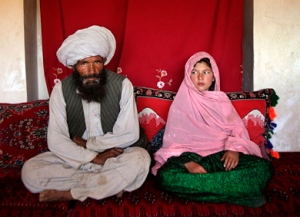 The mother of a little Afghan girl cannot even turn to face her daughter. She looks down in shame as she explains why she must hand the girl over to drug lords.

The father of the girl has done what many Afghan farmers must do to finance their opium farms: borrow money from drug traffickers. But the Afghan government and international forces’ attempt to halt the opium trade has quashed the father’s poppy business, and with it, his ability to pay back the lenders.

The drug lords have taken him hostage to extract a payment.

“I have to give my daughter to release my husband,” the mother explains with the girl at her side. She looks no older than six.

Ninety percent of the world’s opium – the raw source of heroin – comes from Afghanistan. Growing poppy there has been a lucrative industry.

The Afghan government has been cracking down and destroying illegal crops, leaving many farmers in the same horrifying situation as the family forced to use their own daughter as collateral for the loan.

“They’re way more dangerous and powerful than the Taliban,” one father of two kidnapped children says about the drug lords. He looks at a text messaged picture of his daughter being held in captivity as the captors demand $20,000 from the man over the telephone.

These tragic stories are documented in PBS’ award-winning Frontline film, Opium Brides, which was made by investigative Afghan reporter Najibullah Quraishi and producer Jamie Doran.

Quraishi told CNN’s Christiane Amanpour that when the families give up their children, they are often taken to other countries, like Pakistan or Iran, where they are used for transporting drugs or put into sex slavery.

Read the full story and watch a related video by clicking here.