Pierre Omidyar looked out over Nepal’s Kathmandu Valley this past February, scanning the horizon with his camera in hand. All the billionaire eBay founder could see for miles were huge, belching chimneys taller than houses and mountains of red bricks drying in the winter sun. Kids of 12 or 13 lugged bricks on their backs to and from these ovens, 80 pounds at a time. Ninety percent of the workers here in Bhaktapur, the heart of Nepal’s brick sector, are slaves. Day after day they incur more debt to the traffickers who found them these jobs and hovels to live in nearby.

As Omidyar walked around snapping photos, he grew more certain that he wasn’t seeing the whole picture. “They don’t let people like us visit the bad kilns,” he says. “I extrapolated. If this is one of the good ones, what does a bad one look like?” 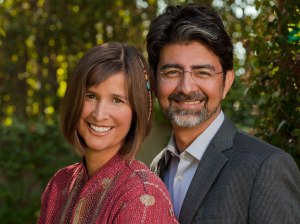 It’s a question he’s trying to make permanently moot. Omidyar and his wife, Pam, are taking their considerable fortune and business acumen and deploying them in an ambitious effort to end modern-day slavery. Nepal, they’ve decided, will be their case study; success would have global ramifications.

This means creating Omidyar-funded options so that Bhaktapur’s children won’t feel compelled to sign the human traffickers’ bogus, exploitative contracts. First up: a $600,000 grant that will pay for 2,500 working kids to leave the dangerous, dirty Nepalese kilns and go to school. Next the Omidyars plan to pay for entrepreneurship and money management training to help 4,000 more brick workers escape slavery.

In the past four years the Omidyars have become the single biggest private donors to the fight against the pernicious but lucrative human trafficking industry. They’ve invested $115 million to date in their Humanity United foundation, which funds 85 antislavery nonprofits as well as on-the-ground projects in five countries, including this first one in Nepal. They’ve pledged to spend another $50 million by 2016.

They’re up against increasingly sophisticated sex and labor trafficking rings, many backed by organized crime, in a business that generates $32 billion in worldwide revenues a year, according to the UN. But the Omidyars have recruited powerful partners that stand the best chance to date to win the battle.

Read the rest of this inspiring story by clicking here.
You can join the fight against trafficking with Out of Darkness and
Shared Hope International.