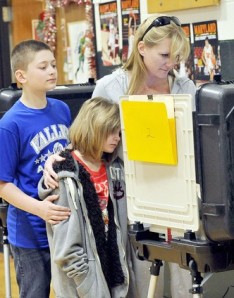 Multiply Justice is trying to carve out some common ground where followers of Jesus can focus on shared values about God’s kingdom coming “on earth as it is in heaven.” We want to see Christians working in harmony to live out God’s will for “the least of these,” the poor and oppressed so desperately in need of hearing good news and experiencing abundant life.

In a nasty political campaign like the presidential race in the United States has been, that’s no easy matter. We have been deeply distressed at the tone of rhetoric coming from both candidates and supporters. Ugly words have been hurled, arrogant lies told with appalling ease. Very few people seem to be engaging the campaign with a positive vision of an America cherishing the love of God and passionately pursuing its highest ideals. We have only the slightest hope that Nov. 7 will be anything but a day of anger, recrimination, and accusation.

We have not endorsed a candidate or party platform, and we aren’t under the impression many would pay attention if we did. None of the options on tomorrow’s ballot should be satisfying to anyone who is focused on pursuing Kingdom justice from a biblical worldview. Politics, of course, always involves compromise. Any political party with two members will face a floor fight over at least one issue at its annual convention. But none of the options before us displays any real heart for social justice or offers a plan for making America a more just society. Both of the major parties are committed to a big government approach to social welfare that causes far more harm than good. Not only will it continue to drive the country into bankruptcy, but it will continue to trap ever more people in poverty and dependency. We believe the power-hungry elites of both parties would be just fine with that.

As you prepare to cast your ballot tomorrow, we want to leave you with three thoughts:

— Justice. We need candidates and parties concerned more about the good of the people than electoral success and the perks of office. Many of our people already have no hope of making decent lives for themselves, and that number is growing rapidly. We need leaders willing to rise above partisanship and forge a partnership — an alliance between key segments of our society that can effectively attack the giant problems that oppress the weak and threaten everyone’s future.

— Life. Life issues must be taken much more seriously. None of the major parties gives more than lip service to life issues. One party has been openly hostile toward concern about the casual way abortion is used as birth control and the trauma disproportionately inflicted on poor minorities. Another party panders to conservative evangelicals, telling them what they want to hear to gain their vote, with no intention of actually doing anything. And nobody at the top is saying anything about the wide range of life issues that ought to concern a civilized society.

— Freedom. When the framers of the U.S. Constitution sat down to establish the Bill of Rights, the first issue they addressed was religious freedom. They plainly said the law must not be used to establish religion or to prohibit its free exercise. Successive American administrations have allowed religious freedom to erode, and the current administration has attacked it directly. The Affordable Care Act (Obamacare) in general and the HHS contraception mandate in particular pose extremely serious threats to religious freedom, but neither candidates nor their audiences seem concerned. A government that can force business owners to pay for insurance covering procedures they find reprehensible is a tyranny that has only begun to explore the ways it can extort its citizens. We should not be comfortable with a tyrant whose oppressions only afflict others, because that tyrant — or one from the other party — will soon turn his attention to us.

We all should exercise our right to vote in an earnest, thoughtful manner, mindful of both the well-being of the poor and the prosperity of the country. We all should pray that the process goes smoothly and we aren’t subjected to the interminable lawsuits for which the U.S. is famous or the violent social unrest that characterizes banana republics.

And if, on Nov. 7, you’d like to set your sights on 2016 and work with other believers to advance Kingdom justice in this country, drop us a note. We can get you hooked up.