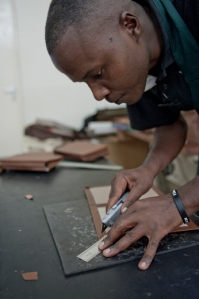 NAIROBI, Kenya — Morris knows firsthand that the slums in Nairobi, Kenya, are filled not just with despair, but danger as well.

Morris has seen his wife stabbed and been robbed at knifepoint. He has been attacked or mugged so many times he no longer leaves his house with anything of value: a cell phone, money, or even an umbrella that strangers could seek shelter under is a risk. …

Violence and despair go hand in hand in these slums — home to almost half of Nairobi’s 3 million people. Housing conditions in slums are deplorable. Most families have little or no access to safe water and sanitation. Jobs are scarce and few people are trained anyway. Alcohol and drug addiction run rampant.

Patrick could tell you about the Kiwanja slum.

“Kiwanja was a desolate place,” Patrick remembers. “There was no road, no development and the big business that was working there was the illegal brew business.”

This illegal brew, known as changaa, is the source of many problems in the Kiwanja community. Traditionally, this alcohol is made by fermenting maize flour, sorghum yeast and different types of sugar for up to 20 days in dirty sewage water. In some areas, people have found ways to increase profit and shorten manufacturing time by adding dangerous chemicals such as jet fuel, methanol and formalin (a chemical used to embalm bodies). Combined with these substances, changaa has caused blindness and death in many people. In recent years, a bad batch of changaa — which means “kill me quick” in the local dialect — took the lives of over 100 Kenyans. Despite the danger, changaa is four times cheaper than beer. It has become a staple for many addicts in the slums.

Unfortunately, the problems are greater than just the drunkards who permeate the community. For some people, brewing changaa is the only way to make a living. Many are uneducated, poor or sick, and changaa is an easy source of income.

Morris and Patrick know it takes an act of God to break through this kind of darkness and give people lives of hope and purpose.

Read the rest of the article here. You can learn more about Sema Leatherworks by visiting their website.