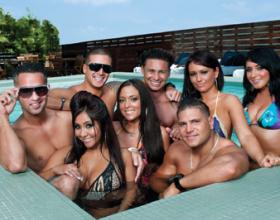 The cast of 'Jersey Shore' (MTV)

Yuval Levin has an excellent post at the Weekly Standard on the disintegration of American virtues and society and the need for a broad-based renewal of social conservatism, which alone can deal with primary issues like  the collapse of family, society, work, and culture among the poor, rather than to the “second-order” problem of social inequality.

And at the New York Times, Ross Douthat says such an awakening must be religious, as well as conservative, because religious belief offers one of the few motivators potent enough to persuade high-achievers to choose lives of service to the weak and powerless and because “religious institutions — with their far-flung networks of parishes and ministries and schools in need of leadership — offer a more plausible mechanism than most other professions for seeding middle America with the talented and energetic.”

Agree or not, both articles are worth reading, as is the book they are discussing, Charles Murray’s Coming Apart: The State of White America, 1960-2010.

The Weekly Standard headline says America’s rich are getting richer and the poor are simply broken. What will it take to reverse the disintegration of fundamental social institutions in America and the West? How important is it that our vision be broader than the problem of inequality, and is it really a “second-tier” problem?

One thought on “Social order matters too”