The Little Book of Restorative Justice 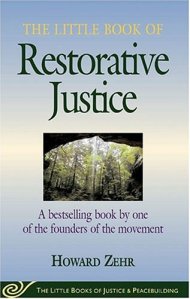 How should we as a society respond to wrongdoing? When a crime occurs or an injustice is done, what needs to happen? What does justice require?

For North Americans, the urgency of these questions has been intensified by the traumatic events of September 11, 2001. The debate is an old one, though, and is truly international in scope.

Whether we are concerned with crime or other offenses, the Western legal system has profoundly shaped our thinking about these issues—not only in the Western world, but in much of the rest of the world as well.

The Western legal, or criminal justice, system’s approach to justice has some important strengths. Yet there is also a growing acknowledgment of this system’s limits and failures. Victims, offenders, and community members often feel that justice does not adequately meet their needs. Justice professionals—judges, lawyers, prosecutors, probation and parole officers, prison staff—frequently express a sense of frustration as well. Many feel that the process of justice deepens societal wounds and conflicts rather than contributing to healing or peace.

Restorative justice is an attempt to address some of these needs and limitations. Since the 1970s, a variety of programs and approaches have emerged in thousands of communities and many countries throughout the world. Often these are offered as choices within or alongside the existing legal system. Starting in 1989, however, New Zealand has made restorative justice the hub of its entire juvenile justice system.

In many places today, restorative justice is considered a sign of hope and the direction of the future.